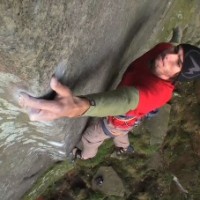 Appearing in hotly anticipated climbing movies has its privileges apparently as Kevin Jorgeson was able to get a sneak peak of the upcoming Big Up Productions release Progression.  In a recent post on his blog Jorgeson shares several screenshots from the movie along with his plans to work this Fall with Tommy Caldwell on a first free ascent of Mescalito on El Capitan:

Tommy and I will be teaming up on Mescalito this fall, so training is in full swing right now. Long days with routes, bouldering, cardio and cross-training leave me wrecked when it’s all said and done. My mantra through it all though is, “It’s easier than El Cap! Come on!”

It’s a bit intimidating thinking about trying to keep up with Tommy on a big wall. No doubt about it. I’m looking forward to getting in the best shape of my life and then spending three months learning from the most experienced big wall free climber around. Psyched!

Check out Jorgeson’s blog for more