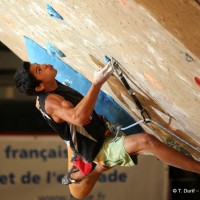 The 2009 World Youth Climbing Championships were held this past weekend in Valence, France with many of climbing’s future (and current) stars on display.

Leading the American effort was rising star Julian Bautista who had an impressive 2nd place showing in the Mammut Bouldering Championships last month.  Bautista, who has the unfortunate task of competing against one of the best climbers in the world in Adam Ondra, finished 3rd in his division in a virtual tie with 2nd place finisher Max Rudinger from Austria.  Ondra of course easily took first place, topping out all 4 routes in the competition.

Two other Americans made it to finals in their divisions, Sasha DiGiulian (4th) and Michaela Kiersch (10th), but Bautista was the only American to make it on to the podium.  Don’t be surprised when you are reading about Bautista sending V14 and/or hard 5.14 in the next couple of years.

Here are the top 3 finishers for each division along with the finishing positions of all American climbers:

Update: You can see some pictures from the comp here or here