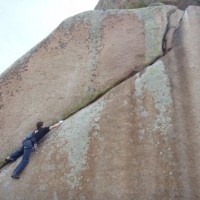 Justin Edl has established a contender for the hardest crack climb in the U.S in the offwidth mecca of Vedauwoo, WY.

Dubbed Home On The Range, this new line is possibly as hard as 5.14 which puts it on a short list of trad climbs in the U.S. to get that propsed grade.  Here is what Edl had to say about the route on it’s Mountainproject page:

The grade on this is nothing but a proposition, and it is meant to be honest when compared to other crack climbs around the U.S. Matt Segal checked out the line before I did the FA and he told me he felt that it was solid 14, so it might even be on the stiff side. I was going to call it 13+, but after hearing what Matt thought I decided to split the difference. Repeats will help settle the grade, up or down. For me, the one time I TR’d it, I felt like it was equivalent to a power endurance V11, and putting in the gear on lead adds quite a bit to the diffculty in my opinion. ← Where In The World Is James Litz?
2009 World Youth Climbing Championship Results →