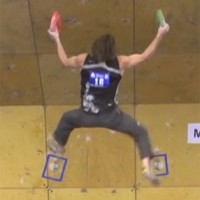 The first round of the Bouldering World Cup at the 2009 Teva Mountain Games is history and 40 climbers will return to climb today, 20 for the Men and 20 for the Women.  There will be a Semi-final round at 11 am today which will pare both fields down to the final 6 who will come back to compete at 3:45 in Finals.

While there is still no live stream of the event, coverage by people in the crowd of the first day was much improved over last year.   The updates on twitter were fast and furious and several people in attendance have now posted updates about the day.

Urban Climber Mag has a nice video posted on their facebook page that features interviews with Alex Johnson, Lisa Rands, Scott Mechler and Kynan Waggoner.  Petzl North America has a brief write-up that includes some photos of the day’s action from John Evans.  And finally, Adam McKenzie of DenverBouldering.com captured a lot of video from the first day that he has started posting both to his website and youtube.  Below are a couple that he has posted so far, but be sure to check his sites for more updates.