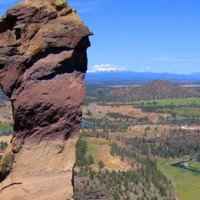 Via Jamie Chong’s blog comes word that Canadian Will Stanhope has done the 2nd all gear ascent of the iconic East Face (5.13d) of the Monkey Face at Smith Rocks, OR.  First climbed with pre-placed protection by Alan Watts in 1985, Sonnie Trotter was the first to complete the line placing all traditional gear on lead back in 2004.

Writing on his blog before his send, Stanhope described what he was going through while working the route:

I have now one-falled the East Face twice. Every time I go up there I lose a tonne of skin and blood. This route is, without a doubt, the most taxing line I have ever tried. It is a long, epic battle with a cruxy huge runout at the very top. Really, really draining.

After a few days of rest he returned to the Monkey Face to complete the send:

In the end, as always, sending came down to a mental thing. I focussed on how wild the climbing was, how much of a joy it was to be up there, and blocked out negative thoughts. Placing all 14 pieces on lead and skipping the bolts, I was pumped out of my mind at the top.

For pictures of Stanhope climbing on the route after his ascent check out Rich Wheater’s blog.