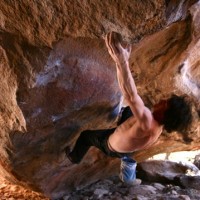 It continues to be a somewhat slow winter on the uber difficult boulder front, but that doesn’t mean that nothing is happening out there.  Dave Graham is back stateside which can mean only one thing:  climbing more V13s.

Starting off on Flagstaff Mountain in Boulder, CO, Graham made a repeat of a problem that Daniel Woods did last year called Epochalipse (V13).  This power endurance problem climbs Reverse UCT (V10ish?) into the infamous Trice (V12).  Moving onto Hueco, Graham continued to rack up V13’s with ascents of Crown Of Aragorn, Couer De Leon, Alma Blanca and Algerita.  This brings his total number of V13 or harder problems to a staggering 101!  There will undoubtedly be video of Graham’s exploits on MVM in the near future.  Whether or not you will like these videos is another story.

In other Hueco news, Australian Chris Webb Parsons has sustained an unfortunate and painful sounding injury near the end of his stint in Hueco.  During an attempt on Crown Of Aragorn (V13) he dislocated his shoulder “for about 3 seconds”.  Ouch.  It remains to be seen whether or not he will be able to climb during the remainder of his trip in Bishop.  I certainly wish him the speediest of recoveries.  If he doesn’t climb a single additional boulder, I think it is safe to say he has already had a pretty successful trip considering his ticklist looks likes this:

And finally, James Webb has done a quick one day ascent of Daniel Woods’ Dark Waters (V12/13) in Clear Creek Canyon, CO.  You can see video of Woods doing the FA back in 2007 by clicking here.

Since I haven’t had anywhere else to post this, check out this picture of the Nada Tunnel in the Red River Gorge during the recent ice storms: