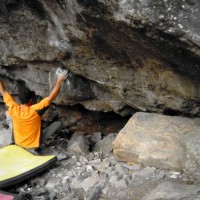 Good luck to the U.S. bouldering team this weekend!

On to the news and notes…