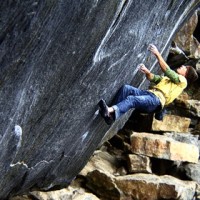 Back in April, Kevin Jorgeson and Paul Robinson made quick repeats of Dave Graham’s Rumney, NH testpiece The Fly (5.14d/V14).  Kevin’s ascent was particularly noteworthy as he was the 2nd person after Jason Kehl to eschew a rope for the 20 and some odd foot tall route.

Check out this video from Tim Kemple of Kevin’s ropeless ascent that was shot as part of a promotional effort for an upcoming East Coast festival, Noreaster.