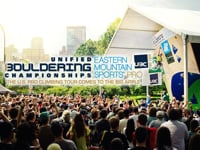 Thousands and thousands of New Yorkers gathered to witness an amazing display of athleticism and drama from the world's best climbers. The crowd collectively held their breath, gasped, screamed and fist pumped the competitors on to their absolute limits. Feeding off the crowd's infectious energy, Vasya Vorotnikov and Angie Payne turned in inspired performances and snagged mens and womens first place victories.

On this day, pro climbing captured the attention of thousands of new fans and even found it's way into one of the world's most acclaimed publications, The New York Times. The sport of climbing was on display for all to see in front of one of the world's largest most influential audiences, New York City, and the result was a resoundingly huge success. Climbing represented itself to be every bit as worthy of delivering the energy, drama, excitement and athleticism expected from a major sporting event.