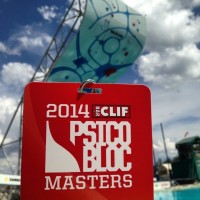 It’s a wrap on what ended up being a very interesting seeding round at the Psicobloc Masters Series event tonight in Park City, UT. The 16 men and 16 women faced off against each other to determine their seeding for Friday night’s finals which will get underway shortly before 7 PM MDT.

The top qualifiers were Claire Buhrfeind for the women and Sean McColl for the men. McColl’s 2nd run in particular was a blazing fast sub-one minute run up the 55 ft. wall. He is going to have to make a mistake, or one of the other male competitors is going to have seriously step up their game to keep him from taking the top spot on the podium. Buhrfeind, at just 16-years-old, leads a very competitive women’s field including other up-and-comers Grace McKeehan and Ashima Shiraishi. Don’t sleep on Alex Puccio either who looked impressive on both her qualifying runs.  Finals should be a great show.  Here are the matchups: And now for the #cloggingthefeed portion of the post with a handful of Instagram snaps from Wednesday and Thursday’s action: