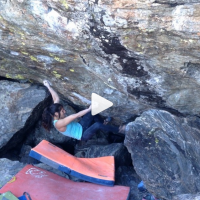 Since wrapping up her season on the World Cup Circuit three weeks ago in Vail1, Alex Puccio has been keeping busy out on the real rocks around Colorado.  According to her 8a scorecard she has sent 12 double-digit boulder problems including four V12s in the past few weeks.  This gives her some 20 V12s in her career with her first V13 yet to come.  Yet…

Well, I actually started writing this post earlier this morning after seeing the above Instagram video from Sam Davis which shows Puccio coming close to repeating the problem Top Notch (V13) in Chaos Canyon, RMNP, CO.  It turns out it didn’t take long for her to finish the problem up as Puccio announced on Facebook this evening that she completed the problem today on what was her 2nd day trying it.

First done by Ty Landman almost six years ago, the first move on Top Notch is reputedly one of the most difficult moves in all of RMNP, and there is no question it is solid for the grade.  It’s very impressive that it took Puccio such a short time to finish it up , but perhaps not all that surprising given her form of late.

On to the next?

← V14 Comes To The Midwest?
3rd Free Ascent Of PreMuir By Elias & Kerzhner →