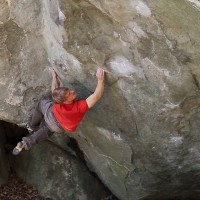 We often joke that Adam Ondra might be a robot based on his out-of-this-world ticklist, but I’m starting to think that if any of the top climbers is a robot it might be Nalle Hukkataival.  Hukkataival injured his shoulder last year which forced him to slum it during his trip to Red Rock where he “only” climbed six double digit boulders including a repeat of Meadowlark Lemon (V14).  Tough times.

Only a couple months removed from that injury, Hukkataival made the trip to Varazze, Italy recently to have a go at Christina Core’s Gioia.  Suggested by Core to be something like V15 or V16, Adam Ondra repeated the problem in 2011 and suggested V16 as a grade after putting in some 11 days of work.

Hukkataival’s shoulder appears to be fully healed or he is in fact actually a robot because he has made quick work of Gioia for the problem’s third ascent.  Video of the ascent appeared online for a short time before being removed because it wasn’t on Epic TV, but look for that at some point in the future.  Until then, these Instagram snaps will have to do.