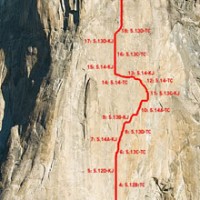 A lot of people, myself included, declared the season over on the Dawn Wall project once Tommy Caldwell got hurt in a freak hauling accident.  Then, a funny thing happened:  life went on.  Jorgeson stayed on and continued to work the route, Caldwell healed up and now the duo are back up on the wall dodging ice and working on pitches.

The pitch 15 referenced in the post is likely pitch 14 in the below topo of the route from a few years ago. Roughly half way up El Cap, this pitch and the ones around it are some of, if not the most, difficult climbing ever done on a big wall like this.