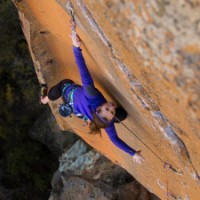 Paige Claassen’s Lead Now Tour to raise money and awareness for 12 charities is well underway at this point, and as part of that effort she is undertaking a significant climbing challenge on each stop of the tour.  Her first stop is in South Africa and it is there that she has done the FA of an open project called Digital Warfare at the aptly named Wow Prow in the Free State province of South Africa.  The project was bolted by local Andrew Pedly and given its name due to the fingery nature of the climbing.
buy lipitor online https://buywithoutprescriptiononlinerx.net/dir/lipitor.html no prescription

It just so happens that Claassen is pretty good at this style of climbing and she was able to make the FA of this likely 5.14 route:

After a few days of frustration, taking me through the typical rollercoaster of emotions that comes with projecting, I sent Digital Warfare. This was the first ‘first ascent’ I’ve ever made, and despite the fact that I didn’t put in the effort of bolting the route, it’s certainly a special experience. Before I arrived, I didn’t expect to be able to do the route.
buy ventolin online https://buywithoutprescriptiononlinerx.net/dir/ventolin.html no prescription

But once I began trying, I knew I was capable.

Look for footage of Paige’s ascent some time in late August on Fitness Magazine’s website.