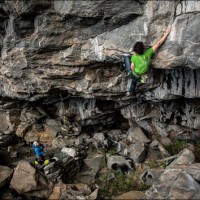 Adam Ondra is back in Norway for the summer, continuing to explore the massive Hanshelleren cave in Flatanger.  Last summer he onsighted a couple of 5.14cs and established a potential 5.15a.  Oh, and he also did the FA of Change (5.15c), a route on a very short list for hardest route in the world.

So, like I said he is back in Norway adding more new routes to the cave.  Photographer Petr Pavlíček is there with Ondra and he reports on his Facebook page that Ondra has added three new 5.14s to the cave including a route called Illusionist that should be 5.14d:

It is rather short, compared to the other lines in this incredible cave, but it has super nice hard bouldery moves and a really tricky dyno, very low above the ground, into a tiny hold which you can not see.

I’m guessing this is not the last we hear about Ondra’s summer in Norway.

← 5.14+ FA By Steve McClure
Guide To Bouldering And Traveling In The Virgin Islands →

One Response to More FAs By Adam Ondra In Norway