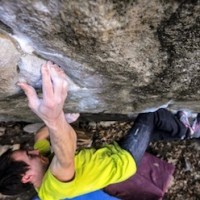 Webb & Traversi Getting It Done In Switzerland

Jimmy Webb has been over in Switzerland for over a month now, and his hard sends are starting to pile up. According to his 8a scorecard, he’s repeated Nalle Hukkataival V14s like Ninja Skills and Off The Wagon in addition to a repeat of The Dagger (long given V14 but given V13, likely appropriately so, by Jimmy) along with a slew of other hard problems in the V11-13 range.

Perhaps most notable among all of Jimmy’s ascents was his flash of the problem Kings Of Sonlerto.  This problem was made famous by Big Up Productions in Dosage IV when Dave Graham was featured doing the problem’s first ascent.  Graham proposed V14 for the problem, however Webb suggests that it could even be easy for V13 in his commet on his scorecard:

Was a freak moment and even the top half was a bit wet. Definitely one of the best blocs I have climbed and topping this out on grass in the rain was hands down the most terrifying experience of my life. Huge props to Dave G and as well Bern for establishing both stand & sit starts.

Also in Switzerland recently was Carlo Traversi who did his first V15 FA when he opened The Kingdom in Brione according to his 8a scorecard:

Hardest 5 moves I’ve ever linked together and it’s perfectly my style. Shouldery moves, high feet, and very tense climbing. Last day in Swiss and couldn’t be more psyched to finally piece this one together.

This is Traversi’s 4th Swiss V15 in just the past 6 months, an experience that will be documented in an upcoming movie.  Hopefully it comes up sooner than that Font video Traversi was supposed to be working on 🙂

5 Responses to Webb & Traversi Getting It Done In Switzerland