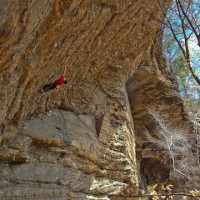 Don’t tell Joe Kinder or this guy, but it looks like Kinder’s route Southern Smoke (5.14c) in the Red River Gorge is the new go to route for young crushers.

After being repeated by 11-year-old Ashima Shiraishi and 13-year-old Kai Ligthner, 12-year-old Harry Edwards made the long trip from Arizona to redpoint the route on April 20th.  Edwards had previously climbed Omaha Beach (5.14a) and God’s Own Stone (5.14a-ish) during a trip to the Red last spring.

Leave a Reply to ronnance Click here to cancel reply.