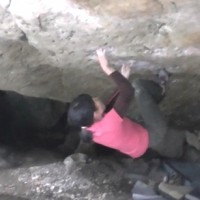 If I were to have had you guess who the first woman to break the V14 barrier would be you’d likely have thrown out some familiar American names like Payne, Puccio or Johnson, or perhaps one of the international names like Stöhr or Johansen.  Well, all of those women may some day climb a V14, but it turns out that Japanese climber Tomoko Ogawa was the first woman to climb V14.

After three  years of work, the 34-year-old Ogawa repeated Dai Koyamada’s Catharsis (V14) in Shiobara, Japan.  Footage of her send can be seen here.  She wrote about the ascent on her blog which you can see a very poor Google translation of here.

Daniel Woods has also repeated Catharsis, an ascent he made on a trip to Japan earlier in 2012.  You can check out a lengthy video from his trip here which features him climbing the problem 2nd try starting around the 11-minute mark.