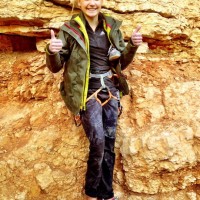 Fresh off a win at last weekend’s Ring Of Fire comp in Massachusetts, Sasha DiGiulian hightailed it to Spain where this morning she repeated Chris Sharma’s Era Vella1 (5.14d) in Margalef, Spain.  This is DiGiulian’s second 5.
buy prednisone online https://noprescriptionbuyonlinerxx.net/dir/prednisone.html no prescription

14d after her ascent of Pure Imagination in Kentucky’s Red River Gorge last October.  Big Up‘s Josh Lowell broke the news on their twitter feed where he indicates that they’ve been filming DiGiulian for the upcoming Reel Rock Film Tour.  Check out the insane rig that they’re filming with!