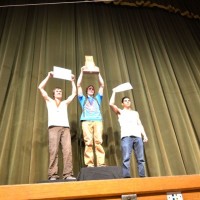 It was about two weeks ago that I learned that last weekend’s ABS Nationals weren’t going to be broadcast online.  Up to that point I hadn’t planned on going for a number of reasons, but that news gave me no choice but to spring into action.  I quickly booked a flight1, and last Saturday I made a power move out to Colorado Springs for an exhausting 20 hours of ABS Nationals fun.  There’s a certain insanity involved in going through all that effort to watch other people climb fake rock climbs indoors, but I’d do it all over again next weekend if I could.

The comp itself lived up to all the expectations I had.  Seeing many of the country’s2 best climbers up close is always a treat and this comp was no exception.  In general the problems were entertaining, and despite the two favorites winning, the comp was anyone’s game as the competitors climbed on the last problem3.

I’d be remiss if I didn’t express some disappointment in the apparent step back being taken this year with regard to the cancellation of the live stream.  In my opinion last year’s ABS Nationals broadcast was far and away the best of the year.  In addition to great climbing, the broadcast had insightful commentary, and it seemed like competitive climbing in the U.S. was really taking a step in the right direction.  Unfortunately, this positive development was followed later in the year by the cancellation of the Summer OR comp and then the late notice this year of there being no live feed for ABS Nationals.  Fortunately, Alex Johnson stepped up to provide a rudimentary live feed and I did my best to provide as many updates as I could, but a comp the caliber of ABS Nationals really deserves something better.

I left the American National Bouldering Championships truly inspired by both the men and the women competitors and the loud, enthusiastic crowd that kept us going though finals. I hope we put on a good show! I have made so many new friends and I hope to return to America to explore the endless rock it has to offer and maybe (if my body can handle it) attempt some more of their truly unique competitions.

It feels good to write, even though this is the 3rd or 4th revision. I started by being mad at myself, then realizing that it’s all part of the game. There are going to be competitions where I climb pretty well, and don’t make the next round. I have to keep my head up and look to the future. In order to succeed, you must first fail, and that drive is what I think about while I train.

The comp itself was following a new format, as there have been many complaints about the Hot Holds system that is was used for the past three years and is main format for IFSC Bouldering Comps.  USA Climbing came to a conclusion that for their comps the IFSC format did not differentiate scores well enough and believed that the scoring resulted in unfair placements. As a competitor I agree with USA Climbing about the clumping of scores but if the point of our Nationals is to determine the US Team, which will then go onward to compete at IFSC events, then we should be selecting based upon those that score best in the IFSC format.  It only makes sense for us to test our athletes on the IFSC format because that will be what they will be scored against in the coming months.

Here is a sampling of some of the visual media out there from the comp.  If anyone knows of others just let me know and I’ll add them to the list.

Leave a Reply to vtew Click here to cancel reply.