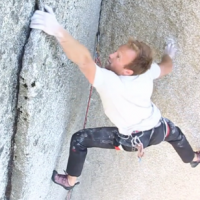 Before we get to this week’s videos there are a few tidbits of news regarding some upcoming climbing movies.

First, the guys at Big Up Productions are over in Spain to catch all the action as Chris Sharma and Adam Ondra work a project at Oliana.  Joe Kinder is on the scene to provide media of the media1 so check out his blog for some great pictures and the details on what’s going down.

Second, Chuck Fryberger just released his winter 2012 newsletter which contains several nuggets about upcoming projects we can expect to see from Chuck Fryberger Films.  Chuck and his team have been hard at work filming Paul Robinson in Vegas, Nalle Hukkataival and Ian Dory in Arkansas, Sam Elias in Ouray, Adam Ondra bouldering somewhere for the 2012 Reel Rock Tour, Fred Nicole for Prana and they will soon be heading to Turkey and Croatia with Kilian Fischhuber.  There’s also the news that Core and Pure will soon be coming to iTunes and Netflix.