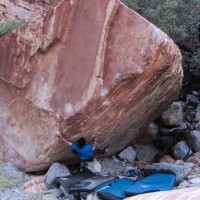 About two years ago Paul Robinson made a trip to Red Rock Canyon outside Las Vegas leaving behind a couple V13 FAs, one of which was called Meadowlark Lemon. Robinson initially climbed Meadowlark Lemon from a stand start while the full line starting from a sit start remained a project…until yesterday.

Robinson is back in Vegas and according to 27Crags he linked a V13 sit start into the original V13 stand start to yield a likely V15 boulder still called Meadowlark Lemon.  Comments Robinson:

I considered it one of the best lines I have ever climbed on in the entire world. The boulder is super physical, yet really technical.
buy symbicort online https://rxbuywithoutprescriptiononline.com/dir/symbicort.html no prescription

The crux revolves around some really crazy heel hooks on the left arete.

The ascent was captured on film for Chuck Fryberger’s upcoming movie, The Network.

← “That High Up Who Wouldn’t Need A Diaper?”
2 More For Esperanza →

4 Responses to V15 Comes To Vegas Courtesy Of Paul Robinson