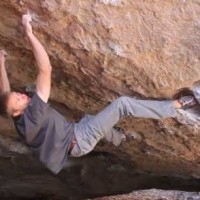 In the past week or so both Brion Voges and Sam Davis have added their names to the list of people who have repeated the iconic Fred Nicole testpiece Esperanza (V14) in Hueco Tanks.

Davis, who blogs regularly from his life where he seems to be constantly climbing somewhere awesome, had previously climbed a handful of V13s1 before doing Esperanza as his first V14.

Voges also did the first repeat of Daniel Woods’ House of Doom (V13).  See footage of Voges on Esperanza and a few other problems here.

As an aside, the last time I posted about a person repeating Esperanza someone made a comment with the opinion that repeats of Esperanza are no longer “news”.  Indeed, by my count the problem has been climbed almost 20 times which is probably a world record for the most repeated V14 in America.  However, in thinking about this over the course of a couple of weeks I realized that I still find repeats of this particular problem interesting for a couple of reasons.

Esperanza has to be one of the most accessible V14s in the entire U.S.  Despite the restrictions in place in Hueco, the problem sits smack dab in the middle of one of the most popular and most visited climbing areas in the world.  The cave it resides in, the so-called Martini Cave, is one of the most popular areas in Hueco itself.  Due to the nature of the climb basically all the holds are touchable from the ground offering anyone the chance to get a feel for the problem.  The reaction that myself and most people have after feeling the holds and seeing the angle:  Holy sh*t, people can climb this?

So, in light of these facts the idea that such a tiny fraction of the greater climbing population, which must number in the hundreds of thousands, can climb this problem still interests me.  And even if a problem like Esperanza has been climbed “a lot”, it still represents an interesting level of progression for anyone who climbs it.

So are repeats of Esperanza worth sharing going forward?  To me they are, so I guess I’ll keep doing so.

6 Responses to 2 More For Esperanza