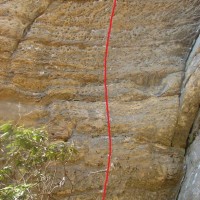 It’s strange to think that just a little over five years ago Kentucky’s Red River Gorge had a small selection of “easy” 5.14s and no truly hard1 testpieces.  With a few notable open projects laying in wait and seemingly endless walls of sandstone filling the Kentucky hills, many people felt as thought it was a matter of time before routes in the hard 5.14 or even easy 5.15 range started to get done.

Visiting climbers like Mike Doyle, Joe Kinder and Jonathan Siegrist helped usher in a handful of hard climbs in the past few years with their FA’s of routes like Lucifer (5.14c), Southern Smoke (5.14c) and Pure Imagination (5.14d) respectively.  In addition to these visitors, a local climber, Adam Taylor, has been having as much if not more success pushing the limits in the Red.  The generally under the radar Taylor has repeated all the aforementioned hard routes2 and established one of his own in The Golden Ticket (5.14d) which he did the FA of back in 2009.

This fall Taylor has been seen repeating Lucifer again and doing the 2nd ascent of Siegrist’s Twenty Four Karats (5.14c), so it shouldn’t be that surprising to read this report from DPM that Taylor has done the FA of what is likely the hardest route in the Red, Southern Smoke Direct.  Southern Smoke Direct climbs the direct start to Southern Smoke 3 adding a difficult, potentially V13 or V14, boulder problem onto the start bumping the grade up to an estimated 5.15a.

Read the full report here to find out more about Taylor’s thoughts on the route as well as how many pull-ups he could do at the top of Southern Smoke after taking a training lap4.

11 Responses to Adam Taylor Brings 5.15 To The Red River Gorge