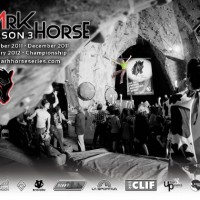 As fall wears on and winter starts to rear its ugly head, many of us head for the friendly confines of our local gym.  While the cold, dark days can be a bit on the depressing side there is one aspect of the winter climbing season many of us look forward to:  COMPS.  In addition to national series like ABS, there are many local comp series cropping up around the country.  One such local series is New England’s Dark Horse Series at the Metro Rock gyms.  Here’s more information on their upcoming 3rd season.

As mortal creatures, our time on this small planet is fleeting.  The very presence of our being is but a spec of dust recklessly hurdling deeper and deeper into the universe’s infinite abyss of space.  As we all together tear through the boundless black cloak of night, we often lose ourselves in the doldrums of our monotonous existence.  Sometimes we become lost–unable to find ourselves. A long, long time ago, one man knew this and decided to make a change.  He realized that in order to truly live, one must test the actual machinery of the human soul–the very fabric that bears the quintessential language of a beating heart.   He figured that since there is no guarantee for tomorrow, one must live for today.  And so began the quest for the Dark Horse…

Louder Than 11 is the media partner for the event and has created a whole new competition promotions experience.  The Dark Horse, a three part video series leading up to the Championship round in February of 2012.  Part 1 Video link:

Metro Rock throws a huge competition every year called “The Dark Horse” and this year, season 3, is no different. Big cash purse, amazing new problems on a huge new wall, and the quest for The Dark Horse. New England’s finest bouldering competition is right around the corner.

2010 highlights and behind the success: