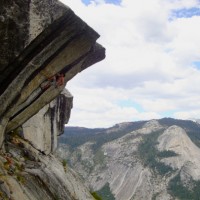 Alex Honnold is back at it in Yosemite, running up routes big and small without a rope according to his 8a scorecard.  He’s soloed single pitch routes like Heaven (5.12d, Flash) and Cosmic Debris (5.13b).  Cosmic Debris, which was climbed by Beth Rodden in Dosage V, is described like this on MountainProject:

A classic overhanging finger crack. The climbing starts with bomber locks until you hit a hand jam rest. From there the crack gets thinner and the climbing gets harder. The whole thing is really damn hard though. Overhanging climbing with microscopic foot holds makes this a major test piece. Have fun!

He also soloed a few longer routes like Direct North Buttress and Ho Chi Minh Trail, both on Middle Cathedral Rock.  For the latter he noted on his scorecard that he might have “FA’ed a 4 or 5 pitch variation by accident”.

Honnold also had a day of “scrambling” on Astroman and The Rostrum, soloing the 5.12b Alien finish on the latter route.

For more on Honnold’s thoughts on climbing, soloing and his place in the industry, check out this video interview as well as a piece on him in Alpinist #35.

Update:  Via DPM comes a reminder about this footage of Dean Potter soloing Heaven

Update #2:  Rock & Ice catches up with Honnold to learn a bit more about his solos of Heaven and Cosmic Debris

Cosmic felt super mellow. It was surprisingly easy and locker. I think that sort of boosted my confidence forHeaven.

6 Responses to More Solos In Yosemite By Alex Honnold – Updated