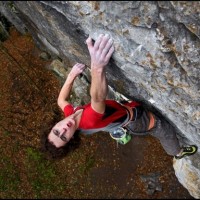 Another Day At The Office For Adam Ondra & Sasha DiGiulian

2011 has been some year for reigning overall World Champions Adam Ondra & Sasha DiGiulian.  5.15 redpoints and 5.14c onsights have become an almost common occurrence for Ondra, and hearing about another 5.14 redpoint or onsight by DiGiulian becomes less surprising with each passing day.  To further prove this point are two recent days Ondra and DiGiulian spent at crags in the Czech Republic and Spain.

Back from a successful trip to South Africa, Ondra put in some work at his home crag of Holstejn in his native Czech Republic.  Over the course of a single day he did the FA of two hard lines, one with a rope and one without.

The route is called Perlorodka (Pearl Oyster) and it went at a suggested grade of 5.15a (his 6th 5.15 FA of 2011).  Gauging the difficulty of things at one’s home crag can be difficult though as Ondra points out in his 8a scorecard comment about the send:

Possibly the route I spent the most time on, but once you are at your home crag, you don’t bother with the tries even when you are tired. So great to send both of my projects the same day! 8a + no-hand rest + 7C boulder + rest + 8B+ boulder (12 moves) + 7B+ mantle onto the ledge

Not finished, Ondra also did the FA of a potential V15 boulder problem he called Pata ledvoce.  This power endurance problem finishes at the first bolt of a route so it will be interesting to see if he tries to link it into said route.

Over in Spain, Sasha DiGiulian took a break working projects to have a day of onsighting.  When the day was over she had onsighted Maskoking (5.14a), Eclipse Cerebral (5.13d) and True Crime (5.13b) according to her 8a scorecard.