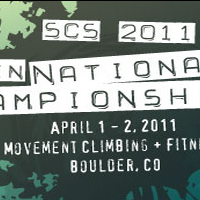 The 2011 SCS Open National Championships went off this weekend in Boulder, CO with Magnus Midtbø and the red-hot Sasha DiGiulian taking the top spot on their respective podiums.

Not surprisingly given the month of March she just had, DiGiulian flashed both qualifying routes and the finals route on her way to victory.

For the Men Carlo Traversi actually got the high point during finals, however the scores were tabulated using a weighted system that counted qualifying round scores which is how Midtbø became the winner.

Chris Van Leuven was at the comp and wrote a play-by-play of events as they unfolded.  I’ll update this post if/when media from the event starts to roll in.

Update #3: Carlo Traversi has an interesting update on his blog about some problems with the scoring system that should have resulted in him finishing 2nd.  USA Climbing has apparently apologized to him and offered 2nd place prize money and the Italy World Cup stipend that goes along with it.

Update #4: Mike Doyle’s take on the event as well as how he went home the day after the comp, went straight to the crag and fired a 5.14b!