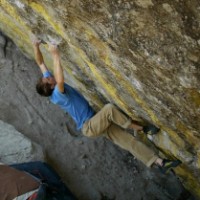 Alex Savage Is Green In The Face

Alex Savage‘s roadtrip around the western U.
buy temovate online https://www.phamatech.com/wp-content/themes/twentysixteen/inc/new/temovate.html no prescription

S. rolls on as he seeks out problems to film for his upcoming movie Western Gold.  His latest stop found him in Idaho’s Castle Rocks State Park to check out Craig Hurst’s Green In The Face, a crimpy V13 that climbs up a stunning wall of green streaked rock.

In the most recent post on his blog Savage shares pictures and the story of his recent efforts on the problem that resulted in a couple of near sends…and a buried truck.  After taking a few days to recuperate he was able to return to the boulder and complete its likely 3rd ascent.  Look for the footage in Western Gold some time in the coming months.

Update: More on the send here

3 Responses to Alex Savage Is Green In The Face