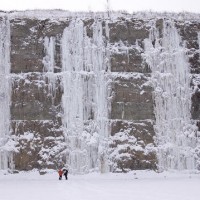 Give Ice Climbing A Try?

Winter is here for much of us in the U.S. which means limited options for climbing outside.  Most of us turn to the gym to prepare for the coming spring thaw.  That’s a fine plan.  It’s what I’m doing.  But what if I told you there was this whole other world of climbing, ice climbing, where people seem to enjoy climbing their way up frozen water in the frigid winter air.  Is that something you might be interested in trying?

My first inclination when presented with a similar question was a resounding NO.  Ice climbing combines three of the things in life that I like least, namely being cold, being wet and being absurdly pumped.  However, I gave the sport a try a couple of years ago and then again once last year.  You know what?  There was something strangely enjoyable about the whole process, and both Mrs. Narc and I found that we enjoyed our brief attempts at ice climbing quite a bit.  Am I about to run out and buy boots, crampons and tools to make ice climbing my winter activity?  Not quite, but I still had fun trying it.

One such festival of local note here in WI is the upcoming Ice Pit Festival held at the Ice Pit near Green Bay on January 15-16.  For a mere $10 per day you can give ice climbing a try with a really psyched and supportive group of local climbers.  If you’re around I strongly encourage you to make the trip up and try it out.  Who knows, you may even like it!

Rock and Ice has an article on their website which lists a few other ice festivals going on around the country.  Check it out and get out and give ice climbing a try…then get back in the ROCK gym to get ready for spring!

Update:  Via Justin at Petzl is this more comprehensive list of upcoming ice climbing events around the country

14 Responses to Give Ice Climbing A Try?