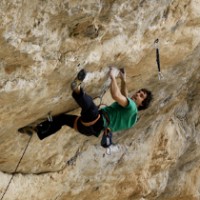 New 5.14 At The Fossil Cave By Joe Kinder

Joe Kinder escaped the snow and cold of Rifle, CO down to southern Utah’s St. George area where he got right to work on an undone Randy Leavitt route at the Virgin River Gorge’s Fossil Cave.  After a few days of work he was able to figure the line out and do the FA of The Centerfold at a proposed grade of 5.14b.  Here’s how Kinder describes the route on his blog:

The style of the Centerfold revolves around a gnarly boulder problem right at the steepest part of the wall. I would say about V9/10 on crappy hand holds and odd angled foot holds that only a down-turned shoe could work on. Pinching with the feet and legs leads to larger dynamic moves on decent holds with no stopping. I fell many times after the boulder problem due to fatigue and the wearing factor of all of those long moves. The ending of Dinosaur 13c has another epic crux at the lip with an incredible dyno to a giant horn.

Check out Kinder’s blog for the rest of the story and several nice pictures of the route.

3 Responses to New 5.14 At The Fossil Cave By Joe Kinder

Leave a Reply to joe Click here to cancel reply.