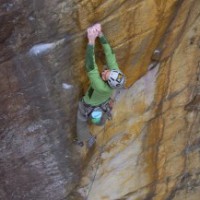 Chuck Fryberger has a nice update on his blog about a trip he took to West Virginia’s New River Gorge to get some footage for his upcoming movie, The Scene.  He was there to follow Pat Goodman and Matt Wilder as they tested themselves physically and mentally on a few headpoint-style trad routes.  The pair didn’t disappoint as Wilder did the second ascent of Goodman’s Fitzcarraldo (5.13b) and did the FA of The Golden Bullet (5.13d), while Goodman did the FA of The Scavenger (5.13c).

Check out Fryberger’s blog for the full story and more screen caps like the ones below.

Pat Goodman on The Scavenger Matt Wilder on The Golden Bullet And yes, despite having to rap down into the trees with a 30+ lb. camera Fryberger did shoot some of this footage using his Red One camera…