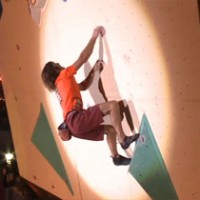 Chris Sharma won a comp over the weekend that was a bit different from the standard comp one sees here in the U.S.  Held in Bilbao, Spain, the Psicobloc Masters saw competitors facing off on a 50 ft. wall over a river with nothing but the water to catch their falls.  Plenty of sports action ensued which you can see in a couple of videos at the end of this post.

Perhaps most interesting about this comp is the excitement its unique format seems to have generated for spectators and competitors alike.  Speaking with the Prana blog Sharma indicates how pumped he was about the comp:

To do a deep water soloing competition was a no brainer from the start.  The high adrenaline and big falls make it a super spectacular spectator sport, more so than any other climbing competition format.

Looking back on the years when climbing was in the X Games but just couldn’t translate to the mainstream audience because if its slow subtle nature, this new form of competition will surely blow the minds of any non climber and I believe will be a key element in climbing becoming a more mainstream sport.

With competitive climbing becoming bigger and a potential appearance in the Olympics looming, I’m wondering what you think about this DWS format.  Keeping in mind that this a brand new format, do you think that a DWS format is better or worse than the typical format one sees in bouldering and sport climbing comps?  Share your thoughts in the comments.