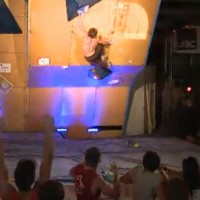 The 2010 UBC Pro Tour event at the Outdoor Retailer Summer Market went off last night in Salt Lake City before a packed house and undoubtedly thousands watching live on the internet.  To paraphrase announcer Obe Carrion Daniel Woods reigned supreme, and on the women’s side of things Alex Puccio kept the streak of someone named Alex always winning this comp going.  Here are the full results:

My planned live blog ran into a bit of a snag when some circumstances beyond my control forced me to be over an hour late meaning I missed the first problem entirely.  I picked things up with the start of the 2nd problem and I’d like to once again thank everyone that stopped by to follow along.

What I did see of the comp was pretty well done.  The entire presentation of the event from the lighting to the walls to the announcing was a definite improvement over past events, and it seems like things just keep getting better with each comp.  The only real negative was the frequent buffering of the feed which myself and several others seemed to be experiencing.

The one thing that stuck out to me from watching the comp though was how hard it is to keep track of what’s happening with respect to who is in the lead and what holds a climber needs to get to in order to move up in the standings.  There was a leader board shown after each round which was nice however within each round it was really hard to follow where things stood.  The announcers were good for the most part but I think I would have liked to hear them talk a bit more about the scoring.

That said, since I wasn’t able to give the entire show my full attention maybe it was just me, so let me know in the comments your impressions of the entire night.