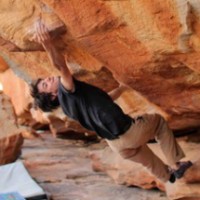 27crags reports that Paul Robinson has done the first ascent of The Big Short in Rocklands, South Africa, proposing a grade of V14.  The Big Short climbs long moves out a roof at a newly developed area in the 8 Day Rain sector.  Says Paul:

The problem’s most memorable move is a large throw from under the roof to a flat edge above the roof that lends itself to a massive swing that is quite difficult to hold.

In recent weeks Paul has also done a couple of problems in the V12-V13 range; however, uncharacteristically high temperatures have made it difficult to try many of the harder problems like Fred Nicole’s Monkey Wedding (V15) which Paul is apparently very close to doing.

Oh, and Paul also responded to that little “controversy” that came up a few weeks back regarding the name of a boulder problem and his reluctance to try Livin’ Large…

Update: Here’s a bit more from Paul on the Black Diamond Journal

Update #2: After further review, including a repeat and suggestion of V13 from Arjan de Kock, Paul has changed his suggestion on this problem to V12 according to his scorecard.  You can see video of Paul’s send on DPM here.