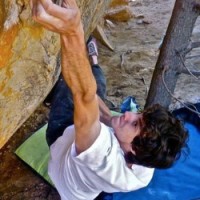 It sounds like Paul Robinson ended his 2 month trip to South Africa’s Rocklands with a bang today.
buy lasix online https://meadowcrestdental.com/wp-content/themes/twentyseventeen/inc/php/lasix.html no prescription

According to 27Crags he pulled off the 2nd ascent of Fred Nicole’s Monkey Wedding (V15) calling it “a huge mental and physical struggle” and the “second hardest send I have ever accomplished” (with Lucid Dreaming, Paul’s proposed V16 FA in Bishop, CA, ostensibly being the hardest).  Look for media from the ascent soon.

Update:  To give you some more background, here’s a page on 27Crags where you can see a topo photo of Monkey Wedding.  Thanks to commenter Fred for pointing that out.