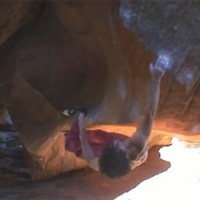 That’s how Noah Kaufman ends every post on his blog where he chronicles the efforts of climbers, well, trying hard.  While Kaufman’s blog does a nice job of capturing the try hard mindset it really comes through much better in videos.  You may remember Kaufman from his cameo in Progression where he enthusiastically encouraged Daniel Woods and Paul Robinson as they worked on a new boulder problem in Rocklands, South Africa.  The guy wants you to try really hard.

It’s along this vein of trying hard and motivating others to do the same that Kaufman will be releasing the movie Try Harder “sometime in 2011”:

Try Harder is a documentary film that examines the philosophy of effort. That being said, there is a strong emphasis on incredible human feats and comedy. This film is by the athletes, for the athletes and the industry.

That last sentence is worth noting as Kaufman will be returning any proceeds from the movie to the”under-funded athletes” who appear in it.  The announcement of the movie even seeks sponsorships/donations to help contribute to that cause.  A noble goal to be sure although it seems hard to believe that 99% of climbing movie viewers feel much sympathy for the financial plight of professional climbers.  Never hurts to ask though, right?

Check out the trailer to see who will be giving their all in Try Harder: