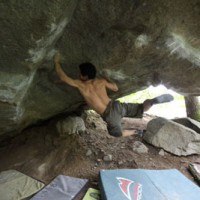 2nd Ascent Of The Story Of Two Worlds (Updated)

Updated 12-17-2012:  Well, it turns out that Koyamada did start in the right place after all and did do the 2nd ascent of this problem. This came to light after footage of Dave Graham on Story of Two Worlds surfaced.

Update: After further review Koyamada apparently started too high and therefore did not do the 2nd ascent of the problem as done by Graham.  See the original news item below:

Over 5 years after its first ascent by Dave Graham in early 2005, Dai Koyamada has made the 2nd ascent of The Story Of Two Worlds in Cresciano, Switzerland.  Adding a difficult V13/14 sit start to Toni Lamprecht’s The Dagger (V14), TSOTW was called a “new standard” for V15 by Dave Graham however it has long been speculated to be closer to V16.  It looks like Koyamada was battling rather wet conditions leading up to his send so congrats to him on a job well done.

I’m not aware of any public video that shows the full line of The Story Of Two Worlds, (although I read somewhere that footage of Graham’s FA Dave Graham working it does exist) but at the 7:15 mark in this video you can see Daniel Woods climb The Dagger:

← Alex Honnold In Red Rocks
Near Onsight Of 5.13 Multipitch By Tommy Caldwell →