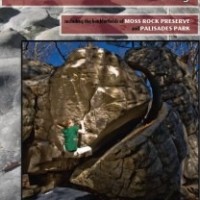 At this point it is no secret that the boulderfields of Horse Pens 40 (HP40) in Alabama hold one of the best concentrations of quality boulder problems in the country.  Featuring great rock, insane features and incredible slopers in one compact area, HP40 has grown into an international destination.

The one thing that has been lacking over the years though is a quality guidebook.  Other than a guidebook passed out at the Triple Crown comp each year, the free topo provided by the now defunct Dr. Topo has been the de facto guidebook to the area.  While this free topo was more than adequate for many climbers (myself included), a more official guidebook was something I’d long hoped for.  After a long wait, Greener Grass Publishing will release the first official guidebook to the bouldering at HP40 later this month.

Written by longtime local Adam Henry, the 184 page Horse Pens 40 Bouldering has everything one would expect from a guidebook in 2010 including full color maps, picture topos for many boulders and action photos all in an easy-to-read layout, and an exhaustive list of problems (including variations for many of them).  Instead of being superfluous or hard to follow, Henry draws on his vast knowledge of the area to carefully explain every problem (perhaps a little too well if you like figuring things out on your own).  Be forewarned though:  the grades given out are sandbagged not forgiving of any excuses about conditions weaknesses one might have when it comes to climbing on slopers and many problems have lower grades than what was shown in the Dr. Topo guide.  Go back and adjust your scorecards accordingly… No guidebook would be complete these days without a few historical essays and the HP40 book does not disappoint in this regard either with essays from the likes of John Sherman, John Gill, Lee Payne, Cooper Roberts and of course landowner Mike Shultz.  Since many people think that HP40 was discovered in the past 10 years, Henry’s historical piece on the area is very interesting to read.  It is hard to believe that it was all the way back in 1994 that Henry first heard about the potential for bouldering at HP40.  Unfortunately, a combination of “ownership that was not psyched on climbers” and the perception that there were “no holds” beneath the layers of moss and lichen on the boulders kept climbers at bay until the early 2000’s.

One thing that cannot be ignored when reading the book is the infusion of Henry’s personality into all aspects of the guidebook.  Whether it is his take on the previously mentioned stiff grades (“Please feel free to whiteout whatever is written and put whatever you want”) or his fight to keep “The Southern Way” alive amidst today’s “cloud of internet spray, rankings, and the pursuit of menial level shoe sponsorship”, Henry is sure to let you know how he feels.  Despite living with my head in the aforementioned cloud of internet spray, and contributing to it on a near daily basis, I didn’t really find Henry’s point of view overwhelming nor did it detract from the overall quality of the book.  To each his own I guess.

You can pre-order a copy of the new HP40 guidebook at Greener Grass Publishing’s website for a special pre-sale price of $21.95.  Once the book is officially released later this month the price goes up to $24.95.  Even if you already have the free Dr. Topo guide, I think it is well worth it to “upgrade” to this guidebook.  Not only does it give much more complete and accurate information, it also makes for a nice coffee table book with its high quality color format.  As an added bonus, 20% of all proceeds will be donated to the newly created Alabama Bouldering Fund.  Though I was lucky enough to receive a personal copy for contribution of a photo and this review, I’m strongly considering ordering a second copy to keep at home where it will not get ruined.

In related Alabama bouldering news, there are two comps coming up at areas featured in this guidebook.  The first is Shades Crest Showdown at Moss Rock Preserve on Saturday February 27th.  The other is HP40 Rocks on Saturday March 6th.  Both competitions will be raising money for the Alabama Bouldering Fund.