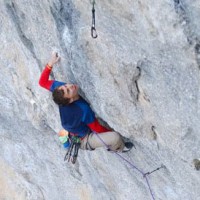 After tearing through the Red River Gorge this fall, Jonathan Siegrist embarked on a trip to southeast Asia.  He spent a few weeks in Thailand and Hong Kong before finding his way to the Chinese limestone sport climbing mecca of Yangshuo.  Despite not climbing much in the month gone by, he was able to produce familiar results in the short time he’s been in Yangshuo.

Siegrist quickly dispatched of routes like Lightning (5.14a), Thunder (5.14a), China Climb (5.14b) and the somewhat infamous American French Gangster (5.14c).  The latter route is well-known for having a drilled pocket on it that Chris Sharma didn’t use on his ascent which has led locals to rename the route French Gangster instead of American Gangster.  Here is what Siegrist had to say about the route:

I had my sights set on another White Mountain test-piece called ‘American Gangster’ 14b. This gigantic (45meters, 23 quickdraws) route features a beautiful gold wall containing great, accurate movement on small crimps and pockets through a lower angle section of cliff. It also features the one and only manufactured hold in all of Yangshuo, a right hand three finger pocket smack-dead in the middle of the business. I had heard that when Chris repeated the route earlier this year he found an alternative sequence that skipped the pocket altogether which the locals have dubbed ‘French Gangster’- I was stoked to hold it down for America and completely avoid the man-made hold. After a bit of messing around I found that there is indeed a sequence just a few feet to the left that never touches the pocket (not even for a foot) and even adds some difficult and super cool moves to the already long crux sequence. I was stoked.. and after one hanging on my second attempt I took a long rest and fired the ‘French Gangster’ third try.

Be sure to check out the rest of Siegrist’s latest blog entry for a well written account of his trip to Yanshuo thus far.