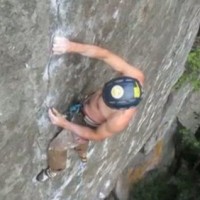 In keeping with today’s theme of R-rated gear climbs is news of a new R-rated gear route in New York’s Adirondacks. Climbing a series of poorly protected seams with poor feet, Matt McCormick did the FA of Wheelin N Dealin’ (5.13c R) this weekend after taking some 20+ falls from the crux while working the route. Writing on his blog, McCormick describes the climbing:

The route follows a 12cish seam to a rest at a horizontal and then through some entry moves to a V8 boulder problem a ways above your last gear. The gear includes three hybrid aliens including a tipped out green/yellow at the crux and several questionable micro rps which fortunately were never tested. This route forced me to use the worst feet I’ve ever had to use on a route and completely changed my perception of what is possible to stand on.

As I noted above, success did not come easy and McCormick took several big falls. One of the falls ended in a rather terrifying upside down slam into the wall that McCormick was fortunate to walk away from with only a bruised elbow.

Check out the video below to see him working the route, falling and eventually sending.  Hit McCormick’s blog for the rest of the story.

Leave a Reply to Matt Click here to cancel reply.