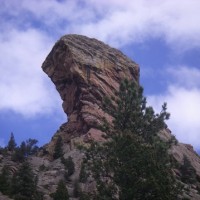 Matt Wilder has done a new trad line in the Flatirons outside of Boulder, CO.  Climbing the North Face of the Devil’s Thumb, Cheating Reality (5.14a R) has sequences as hard as V10 over sometimes marginal all natural gear:

Though the route had some fixed gear, I decided to lead it completely on natural protection. This made the route a bit scarier, but also more clean. The first section (up to the end of the aid route) requires some 5.12a R (maybe R/X) climbing in the first 40ft. Then the gear gets better. The route’s crux move is well protected by two adjacent pieces. After the crux you get some gear before embarking on the headwall but it’s a bit marginal. The final headwall crux (which is about V7) is done with your feet about 5ft above the marginal gear which is about 7ft above the good gear — definitely a bit scary.

Read the rest of the story, and see a few pictures of the route, at Wilder’s blog.