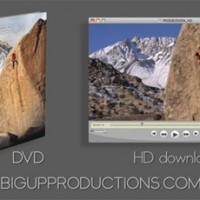 Big Up Productions is back with their latest release, the highly anticipated Progression.  Featuring the long awaited footage of Chris Sharma’s send of Jumbo Love (5.15b) at Clark Mt and a slew of other sweat inducing climbing from Yosemite, Bishop, England, South Africa and Europe, Progression figures to deliver in the way that previous Big Up titles have.

In addition to the usual offering of a DVD for $29.95, there is also an option to download the movie in HD at a reduced price of $19.95.  While it doesn’t come with any extras, this is certainly a welcome option for those that want it (and can spare the 1.7 GB of hard disk space).  Not surprisingly a variety of  first day issues cropped up with the downloads that were mostly a result of an overwhelming response, but it looked like the guys from Big Up were on hand to help take care of people.

I’ll try to have a review once I have a chance to watch the movie a couple of times, but I highly doubt I will be anything but impressed.  If you’ve already had a chance to see the movie, feel free to share your thoughts in the comments.

To coincide with the release of the movie I caught up with Big Up’s Josh Lowell to ask him a few question about the movie and the movie making process:

In a nutshell, what is Progression about and how does it differ from the Dosage series?

Progression is about moving climbing forward. All the different ways that climbing is advancing, and the people who are out there pushing it. It’s similar to the Dosage series in that it documents cutting edge ascents, but it’s in the form of a film instead of a collection of videos. There’s narration that keeps things moving, and it has a bigger, cinematic feel to it.

If people already saw the Progression clip in the Reel Rock Tour, will they be seeing something different if they buy the DVD?

The version of Progression that is playing on the REEL ROCK Tour is about 15 minutes shorter than the version on DVD and HD Download. The Full version includes a segment with Daniel Woods, Paul Robinson, and Tommy Caldwell bouldering in Rocklands. It was featured in last year’s RR Tour, so we didn’t want to show it again on the tour, but it’s great footage that fits in well with the themes of Progression and hasn’t been released on DVD or Internet before.

The extras of past Big Up movies have been really great, what can we expect in the extras of Progression?

Progression has over an hour of extra footage. There’s a 25 minute South Africa featurette that has tons more hard bouldering with Daniel and Paul. So much footage from Rocklands, but no way to fit it all into the main feature. Then there’s a 15 minutes segment showing Tommy Caldwell on Magic Mushroom. This is probably the hardest big wall free route in the world. Tommy did the FA last year with Justin Sjong, swapping leads over 5 days, then he went back to try and free it in a day leading all the pitches. We had a cameraman with him the whole way up documenting the attempt. He ended up falling three times on the last hard move of the last hard pitch and getting shut down. But a week later he went back and did it. This route was pretty underexposed for how crazy it is, and the extra footage gives a real clear idea of what it’s really like to be up there. It’s a lot of long takes, really raw feeling, no music, just watching Tommy doing really crazy technical movement. There’s a very short segment on Magic Mushroom in the main feature, but  it’s kind of overshadowed by the Mescalito project, so it’s good to get a chance to see more of it in the extras. Then there’s lots of additional stuff from the World Cups, Adam Ondra, etc, plus some clips that have come out on the web but not on DVD, like the Pachamama clip and others.

Are you concerned about piracy being a problem with the digital download??

Well, piracy is always an issue. If you really want to, you can download all our movies for free. There’s nothing you can do about the torrents, so we figure we might as well at least compete with them, by giving people the option to purchase downloads from us in a high-quality, convenient, secure way.  In the long run it’s good for us, good for the climbers, good for the sponsors, and good for climbing to have as many people as possible see the content. We just need to be flexible in adapting our models to fit changing times so we can keep doing this stuff!

The finished product always makes it seem effortless, but what is the hardest part about filming these climbs all over the world?

The hardest part is the editing and all the finishing details. Shooting is usually fun and exciting and sometimes even easy. But week after week in front of computers watching the same stuff over and over and wrestling with creative decisions and technical details is tough.

How do you see the success of the Reel Rock Tour affecting the way you make, market and distribute movies in the future (if at all)?

The Tour has been growing fast every year, and it’s definitely an important part of the formula for everything we’re doing. We work closely with Sender Films to make sure that we have amazing fresh material for the tour every year. We’ve structured it so that the exact format is flexible, so we can mix-and-match a program that has a good balance of core action along with more story-driven content. We want Reel Rock shows to feel authentic to hard core climbers but also  accessible to new climbers or other outdoor / adventure-oriented people. The tour is a great platform for promoting the new films and a great way to get them in front of new audiences. People are also drawn to the experience of going to see the films in a theater, with a party atmosphere and the group energy of the crowd. It takes a lot of work to make the tour run and thrive, and our Tour Director, Joss Corkin has done an amazing job, working with local organizers all over the US, Canada, and other countries. This year we should have well over a hundred shows.  As DVDs eventually go the way of the CD, we’re trying to stay ahead of the curve by embracing other forms of distribution, including the tour, television, and internet platforms, including the movie downloads.

I’ve seen a handful of people asking about releasing your movies on Blu-ray, can you explain the difficulties behind doing this?

We do get some requests, from people who want to see the full HD quality of the original footage, but from talking with the distributors and looking at basic Blu-Ray numbers, it’s clear that a very small percentage of people have or actually use Blu-Ray players. It just never really caught on. Newer DVD players do a great job up-resing for HD televisions, so the quality gap is not as big as it used to be. And they don’t make it very tempting for independent producers to release on Blu-Ray either, since the discs cost a lot more to produce and you also have to pay an up-front license fee for the use of the technology.  We definitely understand the desire to watch the movies at full quality, but we think the HD downloads are a more practical solution.

Big thanks to Josh for taking the time to answer these questions!

Check out the trailer and then head over to Big Up’s website to snag your copy if you are so inclined.

20 Responses to Interview With Josh Lowell About Progression, Big Up Productions’ Latest Release

Leave a Reply to seamus Click here to cancel reply.