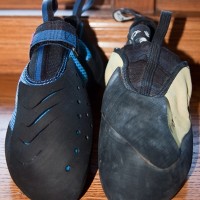 Last week I alluded to the fact that I recently came into possession of a pair of the new Limited Edition Team 5.10 shoes.  Ever since Five Ten discontinued the V10 model (and two of Five Ten’s well known athletes openly petitioned for their return) I’ve been looking forward to the return of a V10-like shoe.

Given that the new Team shoe is pretty similar to the discontinued V10s, I thought it might be helpful to compare the two and see what differences there are between the them (at least superficially).

Other than the obvious blue color, the new shoes have a velcro and elastic closure system, less rubber on the heel and a series of holes and ridges in the rubber on the toe.  The Team shoes also feature the Stealth Mystique rubber where the V10s had Stealth HF.  Whether or not you can notice the difference is anyone’s guess.  Take a look at the pictures:

If you are wondering how to size the shoes, they suggest you size them the same as your street shoe.  For me this is the same as the old V10s as well as the Dragons.  I had a hard time jamming my foot into the shoe at first, but persistent effort paid off and the shoes are breaking in nicely.

Once I’ve had a chance to do some real climbing in the shoes I’ll provide another update.

Posted In: From The Narc
Tags: Climbing Shoes, Five Ten

Leave a Reply to Luke Click here to cancel reply.