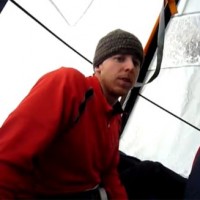 It’s no secret at this point that Tommy Caldwell has been working on freeing an absurdly difficult line up Mescalito on Yosemite’s El Capitan.  Some of his attempts were filmed for the upcoming release from Big Up Productions, Progession, which will premiere at the upcoming Reel Rock Tour.

While we wait for Progression to drop, check out this report on SuperTopo from Chris McNamara that he posted back in the Spring after helping Tommy work on the route.  Most notable from the report, other than the unheard of consistency of the difficulties (4+ 5.14 pitches!) Tommy has encountered while working the route, is the call for help McNamara put out:

So why am I (with permission from Tommy) spraying so much about a route that hasnt been done yet? Because tommy, who’s freed all buy two hard routes on el cap, thinks this might be a ten year project… and he’s hoping some new up and coming climber will get psyched and start the 10 year process now so he doesn’t have to wait till he is 40 to free it…

Answering the call for help is none other than Kevin Jorgeson, someone who is better known for his hard bouldering and scary headpoints and not necessarily his big wall skills.  However, Kevin may just have the right combination of raw strength and calm nerves to get the job done.  Combined with Tommy’s impressive resume of free routes on El Cap they should have as good a shot as anybody, and it will be very cool to see what these two guys can do together come Fall.

While we await their efforts, here is footage of Tommy listing the difficulty of all the pitches followed by a short clip of him working on the climb.

Click Here For Video Of Tommy Caldwell Trying To Free Mescalito – Note, it’s best for RSS readers to click through to the post in order to see the video