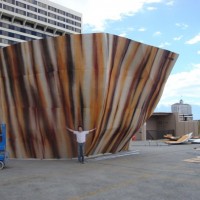 A preview of the comp wall In personal climbing news, I had an excellent day at Devil’s Lake yesterday where we got 7 leads in before calling it a day.  I engaged in some reckless bold behavior by doing my hardest trad lead using a pair of borrowed shoes on a route with iffy gear that I didn’t practice ahead of time.  I botched the sequence high above my last (and pretty much only) trustworthy piece, and I was forced to downclimb a few moves before punching it to the top.  Terrifying and exhilarating at the same time…