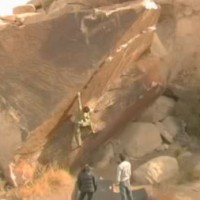 Back in 2003, a strange thing happened in Joshua Tree National Park in Southern California.  A massive rainstorm came through that caused a boulder to fall over from its perch between two other walls.  The happenstance of this boulder falling over revealed the potential for a proud and difficult new boulder problem to be climbed.

It took a visit from Chris Sharma in early 2006 to unlock the difficult and scary sequence that resulted in Iron Resolution (V13), and a few days later Ethan Pringle did the second ascent about which he blogged on Climbing.com:

This boulder (in the Barker Dam area that held two Tony Yaniro offwidths on either side) fell over after a prolonged rainstorm, like, four years ago and revealed an unbelievable wall that had been flush against another rock. (You can actually see a couple bolts on the underside of the boulder.) The angles on the wall are almost perfectly flat, which makes it really unique. I can easily say it’s the most incredible, beautiful and fun to climb problems (apart from a couple in the Buttermilks) I have ever done

Here is footage of Pringle sending Iron Resolution with a nice cameo from Michael Reardon: