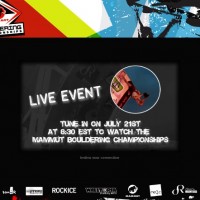 The 2009 Mammut Bouldering Championships are in the books and what an interesting event it was.

The women’s event started in the blazing 95 degree Salt Lake City heat and action was slow to develop.  The bottom 10 qualifiers tried their best to mount a challenge against the seemingly unbeatable duo of Alex Puccio and Alex Johnson, but only Austrian comp powerhouse Anna Stohr was able to finish even 2 of the problems.

Puccio and Johnson quickly flashed the first 3 problems setting the stage for a showdown on the 4th and final problem to decide a winner.  Climbing around and over the insane “Prometheus” eye, Alex Johnson eked out the victory over an exhausted Alex Puccio.  One astute commenter on the live blog compared their rivalry to that of Roger Federer and Rafael Nadal in tennis which I thought was appropriate.  I’d have to check to be sure, but I can’t remember the last time one of the two of them didn’t win a comp they entered (in the U.S.).

Much like the women, the slow to develop men’s final came down to a 2 man race after pre-comp favorite Paul Robinson faltered out of the gate on problem 1 and never got any momentum.  That left the young upstart Julian Bautista as the only competitor poised to challenge Daniel Woods.  Bautista fought his way to the top of all 4 problems to be the leader in the clubhouse so to speak, and he settled in to watch Woods who was a couple of problems behind him in the running order.

Not fazed by the pressure, Woods calmly flashed problems 1 and 2 before sending problem 3 on his second go.  If he was feeling any pressure as he set off on problem 4, Woods failed to show it as he executed one of the more impressive physical feats I’ve seen. Reaching left over his head with his right hand to crimp a hold on the “Prometheus” eye, Woods half campused the move only to find his left hand a foot short of the next hold and his momentum completely stopped.  Showing supreme confidence and freakish strength, he gently kicked his legs and one-armed his way to the next hold on the way to a comp winning flash.
buy cytotec online https://mb2dental.com/wp-content/themes/Divi/core/components/data/new/cytotec.html no prescription

For a more thorough recap, be sure to check out the Live Blog archives.

Perhaps more interesting than the comp itself was how it was covered.  For the first time climbing fans from around the world were able to watch live on the internet as the action unfolded in Salt Lake.
buy antabuse online https://mb2dental.com/wp-content/themes/Divi/core/components/data/new/antabuse.html no prescription

There were a few hiccups along the way with a few frustrating moments for viewers, but overall the live feed was a big success in my opinion.

There were several highpoints to the coverage:

That said, here a few complaints or ideas for improvement that came across during the Live Blog:

Overall, I think the live feed worked out really well and hopefully any critiques people have can be used to make the next event that much better.  Being able to watch a climbing comp without having to travel across the country to see it is a big plus for everyone involved as it brings more eyeballs to the sport, so I hope that this is the first of many to be broadcast (and live blogged of course) in this manner.

Update: thanks to the commented who passed along the video of Woods on problem #4