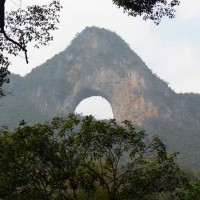 The limestone sport climbing crags near Yangshuo, China, specifically White Mountain, have been receiving an increased level of attention the past couple of years.  The climbing there has been featured in several magazine pieces and high profile movies like Dosage V.  Chris Sharma took a trip there just last month.

Not surprisingly, this increase in attention has resulted in tension between local farmers who own land adjacent to the crags and climbers:

On Saturday morning White Mountain was the scene of a thirty-minute stand-off between a multi-national group of climbers and local farmers who are unhappy about the outcome of talks with Yangshuo’s climbing association. The confrontation was the second this month. Three weeks ago a small group of climbers was threated with farm tools and, after calling the police, were made to leave White Mountain. Several routes were subsequently vandalized.

The crux of the farmer’s concerns?

These are a poor but generous people, and they’d like to make a bit of money for allowing us continued access. Their chief complaint is that we arrive in taxi vans and contribute to the erosion of their dirt roads. This complaint seems legitimate, so I suggested that we might walk or ride bikes to the crag, thereby not damaging the roads. They didn’t seem pleased with this suggestion. I also suggested that we might buy our water and snacks from the village, providing them with some income. I think, in the end, we may just have to pay a few yuan each day to have access to the crag.

Read more about the situation at Cragging.org.

← Chris Sharma Got A Haircut…And FA’ed Another 5.15
Dave Graham Is Back →