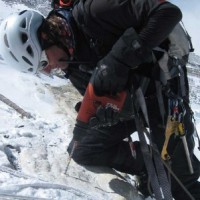 Pictures Of The Bolting On Everest

My current obsession with rock climbing was spawned back in High School by an obsession with reading about mountaineering.  While not as obsessed with the mountains as I used to be, each spring I still pay at least some attention to what is transpiring on Mt. Everest.  There normally isn’t much that happens on Everest that is worth talking about on a climbing blog, but this season there has been a wrinkle added to the mix:  bolts on the Big E.

Bolting has always been a lightning rod for controversy in the rock climbing world, and since Everest is likely the first of the 8,000 meter peaks to have bolts added there is no shortage of controversy there either.
buy singulair online https://noprescriptionbuyonlinerxx.com/dir/singulair.html no prescription

On a mountain that is overcrowded with guided clients, full of litter and covered in old ropes a few bolts to make things safer seems like something that was long overdue.  Just listen to guide Kenton Cool describe the old method of protecting the area of the Yellow Band that was bolted above 24,000 ft:

The band is made up of limestone, marble and calc-silicate and is very compact with just a few horizontal striations that offer almost zero options for anchoring fixed ropes.  In the past, rope has been tied to existing old rope frozen in place with little or no idea what is securing the rope to the mountain. Each of the 7 times I have climbed up through the Yellow Band, I have thought to myself that this spot is a disaster waiting to happen. Sometimes 8 or 9 climbers are all pulling on fixed rope that is secured by a very dubious anchor.
buy albuterol online https://noprescriptionbuyonlinerxx.com/dir/albuterol.html no prescription

Like all the other armchair climbers out there my opinion matters little, but I don’t really see a problem with this bolting initiative.  The slippery slope argument that a small amount of bolting could lead to more “dumbing down” of the mountain is valid, but when viewed in comparison to what is already being done adding the bolts is just not that big a deal.

UKClimbing has posted a few pictures of the bolts being hammered home that you can see by clicking here.

5 Responses to Pictures Of The Bolting On Everest